A copy of some of the TCS Documents 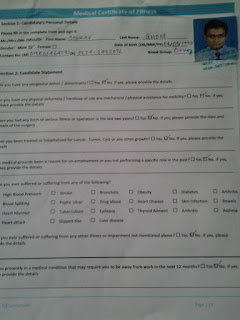 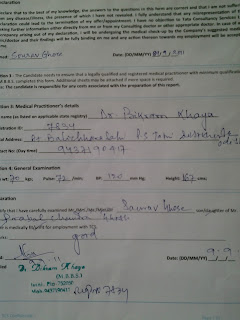 The first two are the Medical forms attached with the signature and seal of the Medical Practioner and his details. 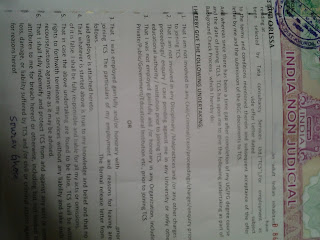 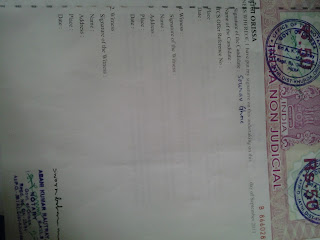 Above two pages are the notarized affidavit of the non-criminal offence along with the points mentioned in the annexure paper numbered 12 with the witness paper too.
All the blanks must be filled by pen only.And in the witness paper , we have to take the signatures of any two persons who are known to us.

A STORY BETWEEN TCS AND INFOSYS

Sudha Murthy* was livid when a job advertisement posted by a Tata company at the institution where she was completing her post graduation stated that 'lady candidates need not apply'. She dashed off a 'postcard' to JRD, protesting against the discrimination. It was the beginning of an association that would change her life in more ways than one There are two photographs that hang on my office wall. Every day when I enter my office I look at them before starting my day. They are pictures of two old people, one of a gentleman in a blue suit and the other a black-and-white image of a man with dreamy eyes and a white beard.

People have asked me if the people in the photographs are related to me. Some have even asked me, "Is this black-and-white photo that of a Sufi saint or a religious guru?" I smile and reply "No, nor are they related to me. These people made an impact on my life. I am grateful to them." "Who are they?" "The man in the blue suit is Bharat Ratna JRD Tata and the black-and-white photo is of Jamsetji Tata." "But why do you have them in your office?" "You can call it gratitude." Then, invariably, I have to tell the person the following story. It was a long time ago. I was young and bright, bold and idealistic. I was in the final year of my master's course in computer science at the Indian Institute of Science [IISc] in Bangalore, then known as the Tata Institute. Life was full of fun and joy. I did not know what helplessness or injustice meant. It was probably the April of 1974. Bangalore was getting warm and red gulmohars were blooming at the IISc campus. I was the only girl in my postgraduate department and was staying at the ladies hostel. Other girls were pursuing research in different departments of science. I was looking forward to going abroad to complete a doctorate in computer science. I had been offered scholarships from universities in US. I had not thought of taking up a job in India. 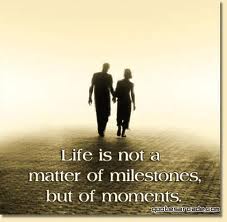 "Be happy while you're living, for you're a long time dead." - Scottish Proverb

Everyone says, "How the time flies." The days go by and they are years, and the years finally become our whole life. Each daily portion can be wasted, or it can be a pleasure, before it is gone forever. If a bedtime review of the day concludes that we were too stressed, too
busy, didn't accomplish anything, didn't have any fun, then it has been another lost piece of precious life.Thinking matters. 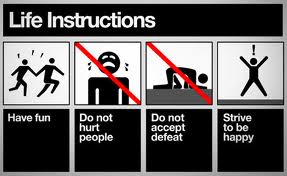 Perhaps we are putting off our enjoyment until we have more time, or money, or some other improved condition. The trouble with that is that it might never happen, or it may be too long in coming.  It's so important to accept this time, this very minute, as something of tremendous value that will very soon be gone forever. There are many ways to ensure that we make the best of our time here on earth.

In our daily routine let's include time to enjoy others and thus ourselves. Look and wonder at the trees, fields and mountains, smell the flowers, hear the birds, and watch the clouds in the sky.Move out with your friends,hav fun,do lots of masti.Make the day as you want it to be.Only you can decide your fate whether you want to live the life at its best or you want to live in pressure,tension and all bad words.

"This world, is still a miracle; wonderful, magical and more, to whosoever will think of it."

Face your problems bravely, confidently, and improve on your situation, no matter what state it be in. Be good to feel good. Be active and improve your mind. Laugh, relax, and sleep well.

" Life is mostly froth and bubble;
Two things stand like stone:
Kindness in another's trouble,
Courage in our own."
Posted by Sourav Ghose at 08:07 No comments:

The Watergate scandal was a political scandal during the 1970s in the United States resulting from the break-in of the Democratic National Committee headquarters at the Watergate office complex in Washington, D.C. Effects of the scandal eventually led to the resignation of the President of the United States, Richard Nixon, on August 9, 1974, the only resignation of any U.S. President. It also resulted in the indictment, trial, conviction and incarceration of several Nixon administration officials.
The affair began with the arrest of five men for breaking and entering into the Democratic National Committee headquarters at the Watergate complexon June 17, 1972. The FBI connected the payments to the burglars to a slush fund used by the 1972 Committee to Re-elect the President.[1][2] As evidence mounted against the president's staff, which included former staff members testifying against them in an investigation conducted by theSenate Watergate Committee, it was revealed that President Nixon had a tape recording system in his offices and that he had recorded many conversations.[3][4] Recordings from these tapes implicated the president, revealing that he had attempted to cover up the break-in.[2][5] After a series of court battles, the U.S. Supreme Court ruled that the president had to hand over the tapes; he ultimately complied.

Facing near-certain impeachment in the House of Representatives and a strong possibility of a conviction in the Senate, Nixon resigned the presidency on August 9, 1974.[6][7] His successor, Gerald Ford, issued a pardon to President Nixon after his resignation.
Posted by Sourav Ghose at 08:59 No comments: